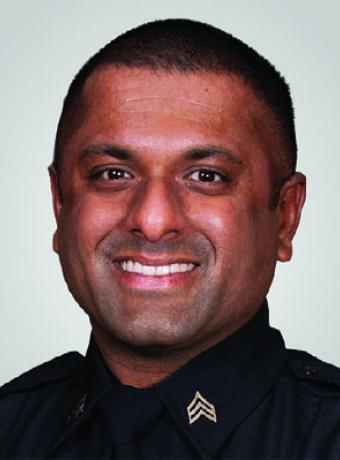 Deputy Chief of Police Michael Kuruvilla has risen through the ranks of the Village of Brookfield Police Department rapidly leading into his 15th year of service due to his balanced approach, gifted intelligence, and perseverance. In his command role, he oversees patrol and investigations and serves as the secondary lead for the entire department. He consistently exemplifies leadership, including stepping up to serve as acting chief during two major incidents while still a lieutenant. He has also procured a grant to secure bulletproof vests for officers, taken the lead in understanding the state’s new laws regarding cannabis, and served for six years as president of the police union before his promotion to lieutenant.

Deputy Chief Kuruvilla has the distinction of being both the first Indian American hired at Brookfield and the first officer in the department to complete crisis intervention training. He holds a master’s degree in social work and has served as a police crisis worker briefly before becoming an officer, skills that have proven invaluable in the field and in modeling effective service to the officers he leads. In addition, Deputy Chief Kuruvilla is a board member and law enforcement liaison for a nonprofit that serves the needs of women victimized by the human and sex trafficking.

Finding motivation in helping those experiencing crises or chaos, Deputy Chief Kuruvilla holds a deep sense of service and is proud to administer justice in his role as an officer.

“My ability and the opportunity to provide someone who may be suffering and in pain even just a moment of reprieve and peace is important and fulfilling to me.”